Do you have a sense of purpose?

For decades, psychologists have studied how long-term, meaningful goals develop over the span of our lives. The goals that foster a sense of purpose are ones that can potentially change the lives of other people, like launching an organization, researching disease, or teaching kids to read.

Indeed, a sense of purpose appears to have evolved in humans so that we can accomplish big things together—which may be why it’s associated with better physical and mental health. Purpose is adaptive, in an evolutionary sense. It helps both individuals and the species to survive. Many seem to believe that purpose arises from your special gifts and sets you apart from other people—but that’s only part of the truth. It also grows from our connection to others, which is why a crisis of purpose is often a symptom of isolation. Once you find your path, you’ll almost certainly find others traveling along with you, hoping to reach the same destination—a community.

In a 2010 paper, for example, Leslie Francis studied a group of nearly 26,000 teenagers throughout England and Wales—and found that those who read the Bible more tended to have a stronger sense of purpose. Secular reading seems to make a difference, as well. In a survey of empirical studies, Raymond A. Mar and colleagues found a link between reading poetry and fiction and a sense of purpose among adolescents.Reading connects us to people we’ll never know, across time and space—an experience that research says is linked to a sense of meaning and purpose. (Note: “Meaning” and “purpose” are related but separate social-scientific constructs. Purpose is a part of meaning; meaning is a much broader concept that usually also includes value, efficacy, and self-worth.)

“Reading fiction might allow adolescents to reason about the whole lives of characters, giving them specific insight into an entire lifespan without having to have fully lived most of their own lives,” they suggest. By seeing purpose in the lives of other people, teens are more likely to see it in their own lives. In this sense, purpose is an act of the imagination.

Many people I interviewed for this article mentioned pivotal books or ideas they found in books.

The writing of historian W.E.B. Du Bois pushed social-justice activist Art McGee to embrace a specific vision of African-American identity and liberation. Journalist Michael Stoll found inspiration in the “social responsibility theory of journalism,” which he read about at Stanford University. “Basically, reporters and editors have not just the ability but also the duty to improve their community by being independent arbiters of problems that need solving,” he says. “It’s been my professional North Star ever since.” Spurred by this idea, Michael went on to launch an award-winning nonprofit news agency called The San Francisco Public Press.

So, if you’re feeling a crisis of purpose in your life, go to the bookstore or library or university. Find books that matter to you—and they might help you to see what matters in your own life.

2. Turn hurts into healing for others

Want to help high schoolers find purpose? The GGSC’s Purpose Challenge for students, educators, and parents incorporates cutting-edge science into videos and interactive exercises. Students can get help with their college essay and win up to $25,000 in scholarship money. Of course, finding purpose is not just an intellectual pursuit; it’s something we need to feel. That’s why it can grow out of suffering, both our own and others’.

Kezia Willingham was raised in poverty in Corvallis, Oregon, her family riven by domestic violence. “No one at school intervened or helped or supported my mother, myself, or my brother when I was growing up poor, ashamed, and sure that my existence was a mistake,” she says. “I was running the streets, skipping school, having sex with strangers, and abusing every drug I could get my hands on.”

When she was 16, Kezia enrolled at an alternative high school that “led me to believe I had options and a path out of poverty.” She made her way to college and was especially “drawn to the kids with ‘issues’”—kids like the one she had once been. She says:

Sometimes, another person’s pain can lead us to purpose. When Christopher Pepper was a senior in high school, a “trembling, tearful friend” told him that she had been raped by a classmate. “I comforted as well as I could, and left that conversation vowing that I would do something to keep this from happening to others,” says Christopher. He kept that promise by becoming a Peer Rape Educator in college—and then a sex educator in San Francisco public schools.

Why do people like Kezia and Christopher seem to find purpose in suffering—while others are crushed by it? Part of the answer, as we’ll see next, might have to do with the emotions and behaviors we cultivate in ourselves.

Certain emotions and behaviors that promote health and well-being can also foster a sense of purpose—specifically, awe, gratitude, and altruism. Several studies conducted by the Greater Good Science Center’s Dacher Keltner have shown that the experience of awe makes us feel connected to something larger than ourselves—and so can provide the emotional foundation for a sense of purpose.

Of course, awe all by itself won’t give you a purpose in life. It’s not enough to just feel like you’re a small part of something big; you also need to feel driven to make a positive impact on the world. That’s where gratitude and generosity come into play.

“It may seem counterintuitive to foster purpose by cultivating a grateful mindset, but it works,” writes psychologist Kendall Bronk, a leading expert on purpose. As research by William Damon, Robert Emmons, and others has found, children and adults who are able to count their blessings are much more likely to try to “contribute to the world beyond themselves.” This is probably because, if we can see how others make our world a better place, we’ll be more motivated to give something back.

Here we arrive at altruism. There’s little question, at this point, that helping others is associated with a meaningful, purposeful life. In one study, for example, Daryl Van Tongeren and colleagues found that people who engage in more altruistic behaviors, like volunteering or donating money, tend to have a greater sense of purpose in their lives.

Interestingly, gratitude and altruism seem to work together to generate meaning and purpose. In a second experiment, the researchers randomly assigned some participants to write letters of gratitude—and those people later reported a stronger sense of purpose. More recent work by Christina Karns and colleagues found that altruism and gratitude are neurologically linked, activating the same reward circuits in the brain. 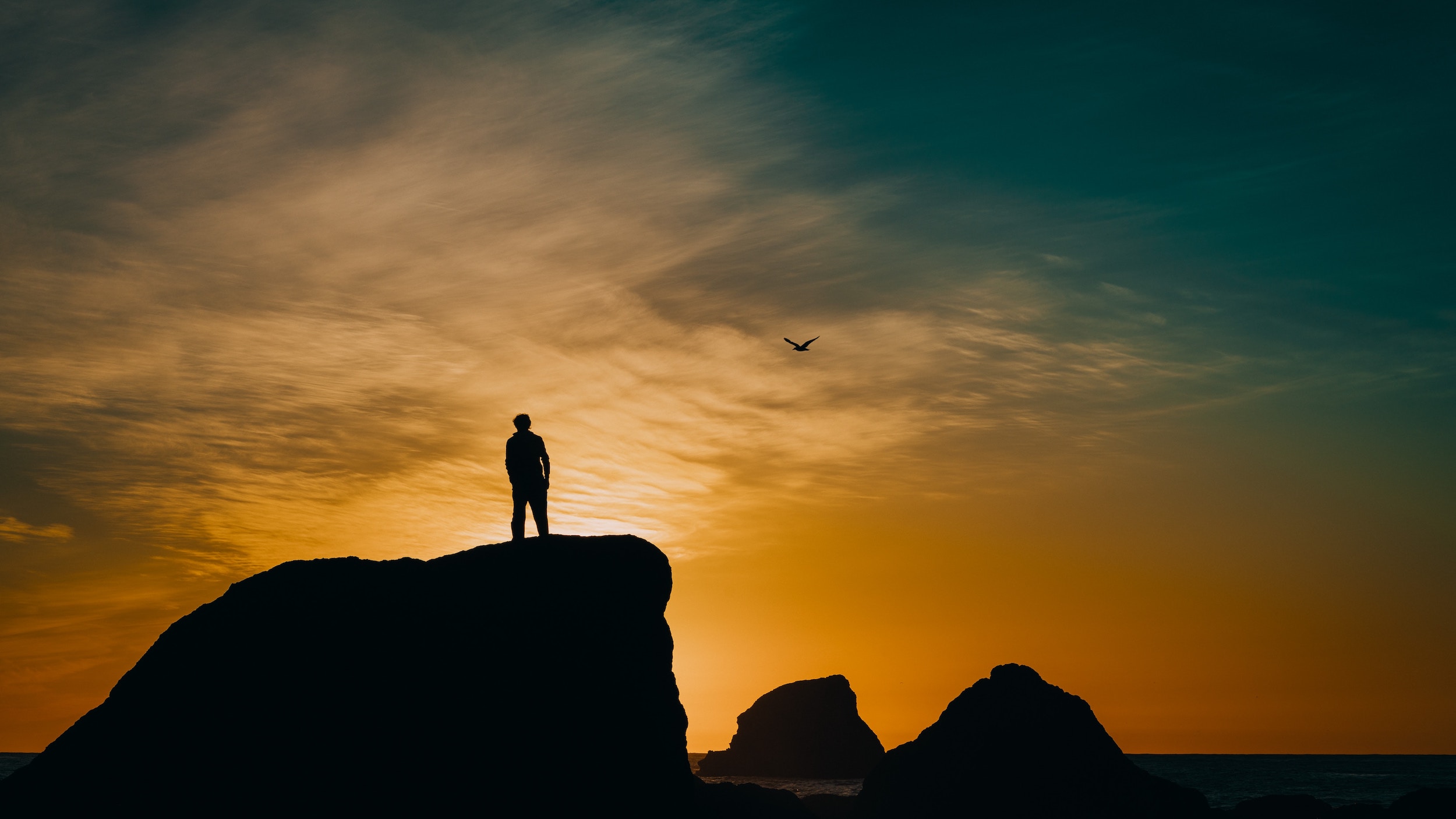 4. Listen to what other people appreciate about you

Giving thanks can help you find your purpose. But you can also find purpose in what people thank you for. Like Kezia Willingham, Shawn Taylor had a tough childhood—and he was also drawn to working with kids who had severe behavioral problems. Unlike her, however, he often felt like the work was a dead-end. “I thought I sucked at my chosen profession,” he says. Then, one day, a girl he’d worked with five years before contacted him.

“She detailed how I helped to change her life,” says Shawn—and she asked him to walk her down the aisle when she got married. Shawn hadn’t even thought about her, in all that time. “Something clicked and I knew this was my path. No specifics, but youth work was my purpose.”

The artists, writers, and musicians I interviewed often described how appreciation from others fueled their work. Dani Burlison never lacked a sense of purpose, and she toiled for years as a writer and social-justice activist in Santa Rosa, California. But when wildfires swept through her community, Dani discovered that her strengths were needed in a new way: “I’ve found that my networking and emergency response skills have been really helpful to my community, my students, and to firefighters!” Although there is no research that directly explores how being thanked might fuel a sense of purpose, we do know that gratitude strengthens relationships—and those are often the source of our purpose, as many of these stories suggest.

Many people told me about finding purpose in family. In tandem with his reading, Art McGee found purpose—working for social and racial justice—in “love and respect for my hardworking father,” he says. “Working people like him deserved so much better.”As we see in Dani’s case, we can often find our sense of purpose in the people around us. Environmental and social-justice organizer Jodi Sugerman-Brozan feels driven “to leave the world in a better place than I found it.” Becoming a mom “strengthened that purpose (it’s going to be their world, and their kids’ world),” she says. It “definitely influences how I parent (wanting to raise anti-racist, feminist, radical kids who will want to continue the fight and be leaders).”

Of course, our kids may not embrace our purpose. Amber Cantorna was raised by purpose-driven parents who were right-wing Christians. “My mom had us involved in stuff all the time, all within that conservative Christian bubble,” she says. This family and community fueled a strong sense of purpose in Amber: “To be a good Christian and role model. To be a blessing to other people.”

The trouble is that this underlying purpose involved making other people more like them. When she came out as a lesbian at age 27, Amber’s family and community swiftly and suddenly cast her out. This triggered a deep crisis of purpose—one that she resolved by finding a new faith community “that helped shape me and gave me a sense of belonging,” she says.

Often, the nobility of our purpose reflects the company we keep. The purpose that came from Amber’s parents was based on exclusion, as she discovered. There was no place—and no purpose—for her in that community once she embraced an identity they couldn’t accept. A new sense of purpose came with the new community and identity she helped to build, of gay and lesbian Christians.

If you’re having trouble remembering your purpose, take a look at the people around you. What do you have in common with them? What are they trying to be? What impact do you see them having on the world? Is that impact a positive one? Can you join with them in making that impact? What do they need? Can you give it them?

If the answers to those questions don’t inspire you, then you might need to find a new community—and with that, a new purpose may come.

My boyfriend still hasn’t told me he loves me. Should I say it first?

Something has to be done’: tackling the UK’s Black maternal health problem

Bread or unbread? Subway and other high street sandwiches reviewed

View all posts by driftmonkeyshopcom →